Geezer: A geezer will usually be found outside a pub with a pint in his hand on match day.

Hello and WELCOME to the inaugural edition of the Geezer Gazette!

If you are reading this, you were lucky enough to be part of the glory days of early darts – a member of the greatest era the game has ever known, when the game was really getting started with tournaments and sponsors and players from all over the world would come together in (mostly) friendly competition and camaraderie, forging friendships that have lasted a lifetime.  It was an era when any player, no matter what skill level, would have an opportunity to play against (or with) the greatest players in the world.

In the year 2022, it was becoming sadly obvious that many of our Golden Age friends were leaving this astral plane and our group was shrinking.  After many reminiscences, a small group of geezers began to think about trying to get the ones who were still left together for old times’ (no pun intended) sake – to relive the memories, remember the friendships and honor those who were gone.

Thus, the idea for the Golden Age of Darters Reunion was hatched.

That Golden Era will be well represented when the clan (a group of close-knit people) gathers at the Tuscany.  Darting greats Jerry Umberger and Sandy Reitan-Green have committed to attend with “maybes” received from Eva Grigsby, Paul Lim and a host of others.  Canada checks in with all-time greats “Big” Tony Holyoake and Bob Sinnaeve.  Yes, Larry “The America Eagle” Butler will attend.  Bill Specht, the official chronicler of the Golden Age, has produced a photo collage of Golden Age members that have entered the venue in the sky.  We remember them as member of the Fraternity.  Some are remembered more fondly than others.

Saturday night will be a great time for all Golden Age Darters to pick up the tungstens for the Golden Age Darters Senior Open.  Some say, “I don’t play darts anymore.”  This is for you.  Current players: this is “not for you.”  No excuses.  There will be three events: Men’s Open (60+), Ladies’ Open (50+ – no proof of age required) with hopefully a mixed doubles or triples depending on entries. 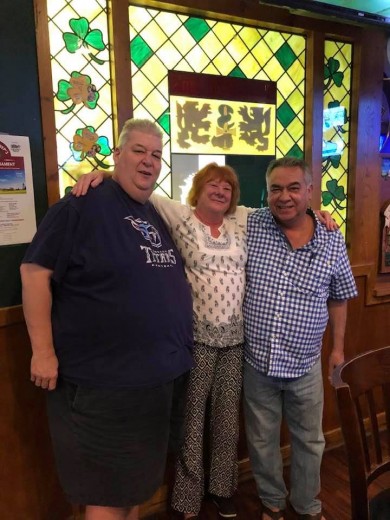 A big thanks goes out to Russ Lopez and David Miller for providing the funding for the Hospitality Suite.  The suite will be open beginning at 4:00 pm on Thursday, January 19 for a meet and greet, and sign in.  Beverages and coffee will be available.  Donations will be gratefully accepted – and are needed.  Thanks to Jerry Feather, FREE beer condoms will be supplied to all Golden Age registrants.  Lisa Farrell joins Miller, Lopez and Feather as an early donor.

Friends and Darters…  I’m looking forward the Golden Age of Darts Reunion at the Tuscany Casino in Las Vegas January 19-21, 2023!  Being an old geezer, this reunion planning has brought back a rush of great memories…

To all the dart players who came through the doors of the DARTBoARd and P.A, attended Feather’s “City Darts” for the 50-plus City Cups – so many great and loyal players (sadly, many have already passed)…