(Warning!  Fact-checkers caution that some of the ODC’s dart “facts” below may not be entirely accurate.  Readers should take them with a grain of salt, a shot of tequila and a lime.)

Shortly after England abandoned “carting” (dragging criminals thru the streets behind a cart – one offense being canoodling), keeping children occupied in pubs while enjoying flagons of mead became a problem.

In the 1880s, joiner (carpenter) Thoreau A. Dart invented a game to keep his three little buggers occupied.  Dart cut a small branch into three pieces.  He found a round of tree stump with rings.  He put the round on the pub wall, gave the short sticks to the munchkins and instructed them to throw at the round.  The sticks bounced off, so a nail was added with Gorilla tape.  The sticks wobbled.  Dart saw children sailing paper airplanes, so he added wings for better flight.

Lotta, his wife, suggesting he name the game.  At the time, sports were going through name changes in England.  “Kicking the skull” had been renamed to “kicking the bladder with the foot” and then to “footbol”.

“Throwing sticks at the round” failed marketing tests so Lotta suggested Thoreau name the sport after himself and, alas, darts was born.  For the second time in history, a joiner (carpenter) changed the course of the world.  Like all games for children the adults joined in.  Darts became a family game.

The Nicoll family has long been synonymous with darts in the USA.  Led by the late Bill Nicoll – mom Ellie, Julie, Billy Jr. and the late Timmy.  The Anderson’s maybe the next first family (although exceeding the Nicolls in representing the country overseas will be a steep hill).   The Andersons are from the metropolis of Falling Waters, West Virginia, population 876.  It’s not a destination city.  Two Civil War battles took place there – The Battle of Hoke’s Run and The Battle of Williamsport. 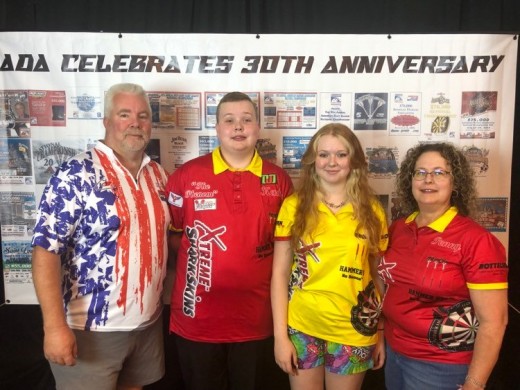 The Anderson’s are led by dad Mark, Kaden (16 years old) and Kenzie (either older or younger than Kaden (the ODC got various answers – a “red headed women’s right”) and mom Penny.  Mark is the spokesman as the rest of the family are so soft spoken that a whisper sounds like a trackside seat at a NASCAR race.

The star now (red-headed sister might disagree) is Kaden Anderson.  He shows a maturity beyond his age with his feet firmly planted on the ground of his 6- foot frame.  He has current and future goals with a path laid out for each.  Currently, his plan is to again represent the USA at the JDC (Junior Darts Corporation) 2022 World Championship.

Kaden’s “team” includes father Mark – and Russ “The Legend” Lopez and Bottleson Darts are there for advice and support.  Bottleson Darts has always been an encouraging factor for Youth Darts.  With Anderson they took the extra step as primary sponsor, a line of machine and steel darts along with the nickname “The Phenom”.  The handle actually means “great potential.”  The road to “The Phenom” is a path taken with the first step.  He’s done that.

Journalist Jessica Wilt (Martinsburg Journal, circulation 25,908) wrote, “Looking at Kaden Anderson, you see a sweet face on a young, soft-spoken 12-year-old boy.  However, when Kaden steps up to the line he turns into a beast, beating players more than twice his age.”  She missed the old canard, “Baby-face Assassin.”

Young Anderson is well on his way to a return to the JDC World Championship in Gibraltar, November 21-25.  In 2021, Kaden made it to the quarter finals before losing to finalist Leighton Bennett 4-3.  Anderson fell behind 3-nil but fought back to forge the decider.  He would sign the loser’s card to a 12-darter that concluded with a T70 finish (Kaden was on T60).

Anderson’s teammate, Peter Stewart Jr, made it to the top 16 while both James Butler (Larry’s son) and Bryar Redman failed to exit round robin play.  Indeed, Anderson is well on his way to a return to the JDC World Championships – after 9 of 12 events, he is safely in the top three with Peter Stewart Jr. and Ryan Avellino.  Only 3 make the trip although (Canada gets 4).  Sitting in 4th position for the USA is Kaden’s sister, Kenzie.

The past weekend, events #7-9 were played.  Anderson would win event #7 defeating Canadian Adam Daponte Dempsey 4-1.  His semifinal win over Ryan Avellino 3-2 saw Anderson come from 2-1 down.  Event #8 had Anderson losing to Joey Lynaugh 4-3 in 16 darts when he couldn’t check 82.  Avellino took out Anderson 3-2 in event #9 in the semis.  CDC Junior Darts points leader, Peter Stewart Jr., passed on Junior Darts for the main events in Nashville.  Anderson could grab the #1 ranking (this was not available at press time).

The ODC may be engaging in hyperbole in defining the Andersons as “THE NEXT” next USA darting family.  Currently the Nicoll’s family have more accomplishments.  The potential is there but, like climbing Everest, a difficult undertaking.

The ADA 30th Anniversary event, besides being a Covid spreader, spotlighted the Andersons family.  Mom Penny won the cricket warm up singles, with daughter Kenzie runner-up is ladies cricket and, with Kaden, 3rd in mixed doubles and redheaded vixen, Kenzie, 4th in mixed doubles.

Kaden’s trip to Las Vegas was good.  He finished 2nd in both 501 regular and pro 501 singles and won the men’s pro 501 doubles with.  Rick Allred.   One week doesn’t make a career though is an indication that with continued progress he, along with Galvin Nicoll and James Butler, are the future of USA darts.  Add in Aaja Jalbert – then bring on the world.

Now is a good time for James Butler, Gavin Nicoll, Kaden Anderson and others as darts are growing with the PDC involved.  Nicoll and Butler have a leg up – mentored by their fathers Larry and Timmy, they tossed their first darts shortly after the doctor slapped them on the ass as they emerged from the womb,

“The Phenom” is a work in progress.  It’s best to remember that when the Italian family Stradivari made their first violin, when played it sounded like a plastic ukulele from the 99-cent store (now $1.49).  In time, it evolved to become the Stradivarius.