As American’s celebrates the 4th of July, Independence Day, we pass along a belated Happy Canada Day as on July 1, 1867, they consolidated three territories into the nation of Canada.  They wanted July 4th, but we already had it.  The Declaration of Independence was actually passed on July 4th, 1776, by the Continental Congress (when Congress actually did something) but not signed until August 2.

We owe a big thank you to Great Britain and King James VI and Chares I of England and Scotland for encouraging the sailing.  Charles 1 was rewarded by being decapitated on January 30, 1649.  No good deed goes unpunished.

Had the Mayflower not sailed from Plymouth in 1620 the natives might still be eating roots and berries.  The country might be heading that way again.  The Mayflower had 102 passengers, some called Saints, disputing the Old Dart Coach’s theory that some were dart players.

Passengers Miles Standish and John Alden become famous in a poem by Henry Longfellow.  The Courtship of Miles Standish.   John Alden went to Priscilla Mullins to propose on behalf of Standish.  Priscilla said, “Why don’t you speak for yourself, John Alden?”  He did.  They had 10 children and hundreds of descendants, some famous like John Adams, John Quincy Adams, Marilyn Monroe, Calvin Coolidge, and George Orson Welles.   Marylyn Monroe?

July 4th brings a memory to the ODC of one year in West Palm Beach at a three-day tournament.  The attendance was sparse allowing downtime in Tony’s pub.

The blind draw saw the ODC draw great.  He lost first round with a player who would win three events.  The ODC brought another down.  For the ladies single early in the morning, the late Peggy Phillips asked the ODC to mark (done on large sheets of paper.  It was best of 5, tied at 2.  Then came double 1 in the decider.  Enough paper was used to replant the rain forest.  About the 100th dart mark the ODC actually moved to stay conscious.  Ms. Philips exclaimed, “Stop moving!”  Like that was a problem.

Finally, to win the match and end the “cruel and unusual punishment” to the ODC, Peggy hit d1.

As the ODC the was leaving the playing area Paul Lim asked, “Can you mark for me?”  “Sure, just spent an hour marking for Peggy – I can do anything.”  Then came a sharp pain in the middle of the back as Phillips nailed the ODC with a dart.  “That,” the ODC pointed out, “is the first thing you’ve hit all day that you aimed at.”  Cat like reflexes allowed the ODC to dodge her answer, which fell harmlessly to the floor.

Modern darts were invented in 1896 by carpenter Brian Gamlin who modernized the game from the 14th Century – et more holes in the ODC’s Mayflower theory.  Serviceman returning from World War II, which England got us into, brought the game back.  It became popular on the East Coast and pockets in the West.

The first Great Britain wave came on St. Patrick’s Day March 1974 at the Royal Manhattan Hotel in New York City.  The USA team was made up of players that would become legends.  The Yanks won 9-6.  The newly formed BDO had chosen the best and were beaten.  Tom Fleetwood of the “new” ADO gets some credit along with Bob McCloud who ran the United States Dart Association. 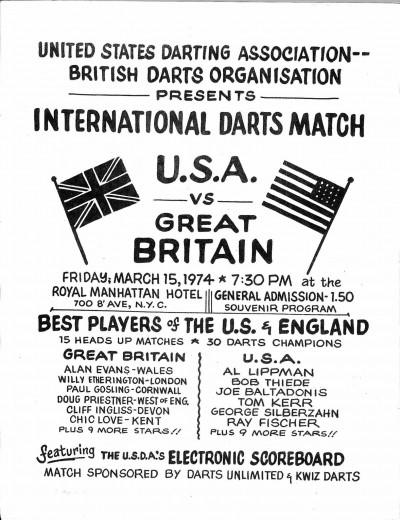 The USA winners: Bob Thiede (2-1), Al Lippman (2-0), Danny Valletto (2-0), Jim Macredes (2-0), Tommy Kerr (2-0), Joe Pacchainelli (2-0) – voted MVP – and Ray Fischer 2-0 over Alan Glazer.   Nicky Virachkul lost to Ken Brown 2-1, the father of the ADO’s Steve Brown.  Leighton Rees and Alan Evans would both win for the invaders.  The next time the USA would beat the UK was in Melbourne at the World Cup.  John Kramer, Tony Payne and Rick Ney were joined by Danny Valletto.  Maybe the late Danny was the key.

They played.  Fisher kicked ass using wooden darts and averaging 95.77 on a board with “big fat wires and staples in every corner.”  What would Fischer average on today’s board?  It would be Michael, Phil, Peter and Gary WHO.

A Poem by Jerry Walter’s commemorates that day…

“The best in the world,” they were touted, when they came to the U.S. to play

But the team brimmed with overconfidence the day that they stepped off the plane.

The Yanks were just rank beginners, and the English would put them to shame

Why, the Yanks still threw wooden darts, they had used in the American game

The dart world was in for a shocker, from the time the first dart was thrown

The crowd could hardly believe it, the Yanks were holding their own

The people all cheered for their idols, the excitement hung heavy in the room

And the smiles of the Englishmen had vanished, as the Yanks had sealed their doom

When all of the scoring was over, the Champions had been dethroned

The Golden Age had arrived.  It would prosper for 20 years.  It was the best of times.  We showed our hospitality by opening our homes as they drank our beer, won our tournaments and stole our women.  We miss our cousins.

It was a 4th of July afternoon at the PGA West in West Palm Beach.  The ODC was sharing a pint or 10 in the downstairs Tony’s pub with the late Barry Twomlow.  Never missing a chance for a mickey on Barry the ODC asked…

“Do they celebrate the 4th of July in England?”

“One of our biggest holidays.”

“Really?  You celebrate the 4th of July, our Independence Day?”

“We’re celebrating getting rid of the likes of you.”

He did have a point.

Special thanks to Richard Wade (Pacific Darts Association) and Bill Specht for their assistance with this effort.

HAPPY 4th to ALL!