Twelve years is a long time by any standard.  It can see a child from prepubescence through adulthood, a young adult from college through marriage and a family of their own.

Twelve years by measures of the heart can be a flash of lightning, briefly illuminating the whole sky – and then gone.

Romy was with us for twelve short years.  She came to be here through a happy, serendipitous accident.  And during her reign as Princess Romy from Romania, she stole our hearts forever.

That she came to be with us was against all odds from the start.  We do not know the facts of her birth, or the date.  We don’t know if she had littermates.  We don’t know why she wasn’t wanted.

This is what we do know: on a subzero night, in the middle of a fierce blizzard in Galati, Romania, someone left a tiny puppy in a covered cardboard box, in a snowbank outside the gate of ROLDA, the Romanian League in Defense of Animals.  She was found when staff came to unlock the sanctuary in the morning – shivering, hungry and frightened.  They took her inside to feed her, warm her and wrap her in blankets.  She was too young to have been taken from her mother.  She did not know how to drink water from a cup.

What Romy did know was that she was going to survive.  She was a force of nature with an indomitable spirit.  When she met Paul later that day, she ran to him and bit the toe of his shoe.  He picked her up to hug her and it was love at first bite.  I received an emailed photo from him, holding her on his lap, with the simple caption, “Can I keep her?” 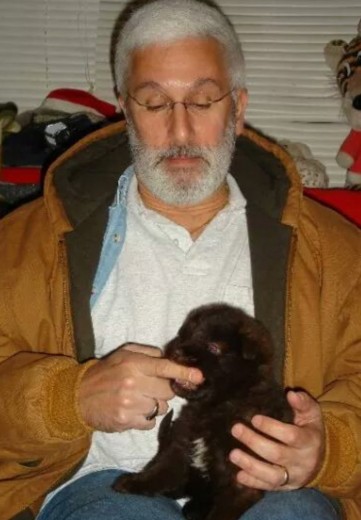 My answer was, “Of course.  If you can figure out how to bring her home, she will be here forever.”

It took the help of many to accomplish this.  She had to have shots and be microchipped.  She was treated for fleas and ticks.  A special Puppy Passport was issued, and a bag of travel supplies was assembled.  A pet carrier was purchased.  And special arrangements were made with various airlines – from Bucharest, where Paul was now waiting for Romy’s delivery, all the way through Germany and on to Chicago and finally, Tampa.  She needed her own ticket to fly on the plane with him.  She would not have survived the long trip in cargo hold.

It took almost nine hours to drive from Galati to Bucharest with Romy.  There was another blizzard, so it took twice the normal time.  But she made it.

And the long trip home began.  She attracted attention wherever she went.  Paul had to take her out of her little carrier to go to the bathroom (in the men’s room at the airport and the bathroom on the plane) and then, clean up after her.  He fed her bits of food from tiny cans and gave her drinks of water from his fingers.  She hated her crate.  She just wanted to be held.

When they landed in Tampa just before midnight on February 8, 2010, I was there waiting.  Paul opened the carrier and Romy stumbled out – and promptly tipped over.  I scooped her up to kiss her and she bit my chin.  I like to think that in that moment, she knew she was safe at last.

We brought her home to meet her new big brother, Bentley.

The next morning, she met her new vet.  She weighed three pounds. 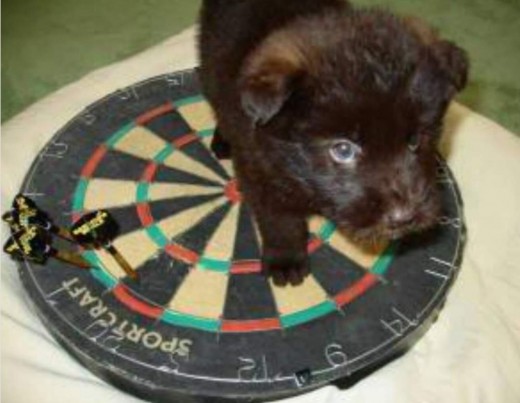 She got more shots and a new chip – and treatment for worms began.  For the rest of her life, Romy would have the very best veterinary care.  And we began our own exciting journey – to see what kind of dog she would become.

We decided that, given her total lack of control over her destiny at the beginning of her life, we would let her tell us and show us what she wanted now.  And we did that – often with hilarious results.  She went through many phases of development.  There was the Romy Moving and Storage phase, during which she would move various objects from one place to another.  We would find throw pillows from the family room in our bedroom.  Rugs from the entrance would end up in the family room.  She even moved her tiny bed from the master bedroom to the living room.  This phase lasted for several months, until she lost interest in moving things. 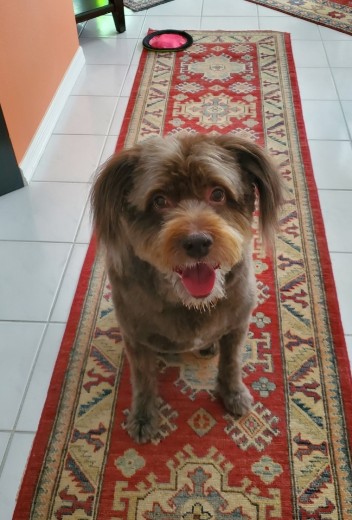 Over the years she ‘told’ us when she didn’t like a groomer.  Or a pet sitter.  We always listened to her, because she was always right.

When we lost Bentley two years later to cancer, Romy went with us to interview every breeder and every dog we found who needed a new home.  She had the final vote, always.

She wasn’t certain when we got Marky, a six-week-old English cream golden retriever, and for the first week she ignored her new little sister.  But Marky was nothing if not persistent.  And it didn’t take long for Romy to fall in love… 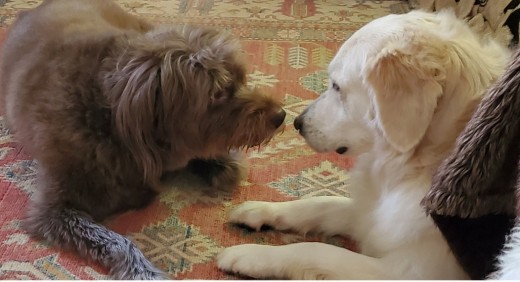 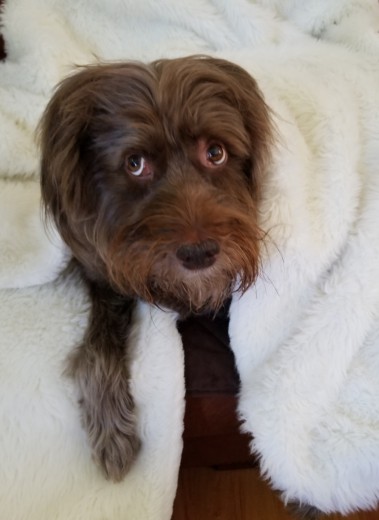 For the rest of their years together (almost ten in all) they were inseparable.  I have so many indelible memories that I will carry with me: the way she would just sit and stare at me… the feel of the soft fur on her tummy when I rubbed it… the way she would check on me during the night with soft peeps to wake me… the little chirps she would make in the morning – letting me know it was time to fix her breakfast… the way she ‘talked’ to me when she wanted her dinner… her excitement whenever I returned from a trip to the grocery, however short it was… her happy little face waiting for me at the laundry room door when I opened it.

And then, on a warm sunny day in mid-May of 2021, a couple hours after Saturday breakfast, we saw a lump on her back left leg.  It was the size of a Ping-Pong ball and it had appeared so fast that we thought it was some kind of venomous bite.  We called the vet.  They scheduled her for surgery on Monday and we dropped her off early.  They removed the lump, told us it was probably a mast cell tumor, but they needed the pathology results to be certain.  We waited for two weeks to get those results.

When they finally called, the news was not good.  It was an aggressive mast cell cancer and they had not been able to get it all.  Because of where it was, they recommended amputating her leg and putting her on strong chemo drugs.  If we did not do this, they gave her 2-4 months to live.  If we did as they recommended, there were no guarantees that her life would be much longer.  We took a week to make the decision I had already made in my heart.  We contacted vets Paul had worked with over the years and asked for their advice.  Without exception, they told us to put her on a low dose of prednisone for the cancer, a pain pill (gabapentin) to keep her comfortable and feed her a diet high in fiber and Omega 3.  Green beans and pink salmon became her evening meal.

We continued her normal routine so she would feel secure.  We gave her constant love and attention.  We let her tell us when she was ready for bed at night – and she felt right at home bossing us around!  She got to go on one last holiday to St. Augustine, enjoyed one last visit from Jami, our daughter, and one last New Year’s celebration.  But we knew, as we watched the months tick by, that the inevitable was just around the corner.  We had turned the 2-4 month prognosis into 8 months.  That was our gift to her.  And her gift to us was soldiering on to reach this point.

We had promised her, and each other, that if she reached a point where she could no longer stand, we would let her go.  That moment finally came.

On a cold and rainy day, January 25, 2022, Romy took her last trip to the vet.  We sent her over the Rainbow Bridge, where she would be free of pain at last.

The night Romy left us for the last time, Marky quit guarding Paul’s pants at bedtime, something she had done since puppyhood.  She knew that Romy would no longer try to take them.

The day we took Marky with us to pick up Romy’s ashes and bring her home for the last time, Marky was so quiet and sad.

Life goes on now… as if the past twelve years has been a brilliant illusion.

Romy sits in my office in her little urn, watching me as I type this.  And I whisper to her…

“Godspeed my tiny angel.  Run and play with your big brother Ben.”