In 1940, Thomas Wolfe’s novel, You Can’t Go Home Again, was published.   That premise was tested twice last week in the UK. The Old Dart Coach investigates.

Night one of the Premier League arrived in Cardiff, Wales, with locals Gerwyn Price and Jonny Clayton.

Clayton gave the home fans something to cheer about with a 6-2 skinning of Joe Cullen.  Cullen, newly crowned Master’s champion, got buried by Clayton – having no answer for his 103+ average.  Cullen assisted, collecting only 2 finishes from 19 chances.

Clayton would reach the finals against Peter Wright.  Wright had dispatched Gary Anderson 6-5 then steamrolled Clayton with a 113 average and a 6-1 win.

Wolfe was half right.

The first ever World Senior’s Championship returned home to the Circus Tavern.  It was a homecoming for players Mr. John Lowe, Bob Anderson, Phil Taylor, Peter Evison, Keith Deller, Alan Warriner-Little and Larry “The American Eagle” Butler.  They had all played in the first PDC World Championships in 1994 at the Circus. 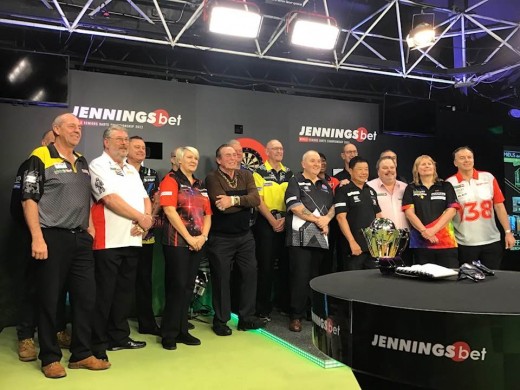 In that inaugural event Dennis Priestly defeated Phil Taylor 6-1, winning £16,000.  This would be Priestley’s second World title having defeated Eric Barstow 6-nil in 1991.  Some time ago, when asked if he missed darts, Priestly, a man of few words, said “No.”  He was a spectator when the crew reconvened.

The last PDC World Championship match held at the Circus Tavern was in 2007.  Raymond van Barneveld came from 0–3 down in sets defeating Phil Taylor, 7–6 after a sudden death leg.  Many people (weasel words) consider this match to be the greatest in the history of darts.

In this instance Thomas Wolfe was full of beans – as not only did the seniors return home, so did the crowds.  In a shock to some (more weasel words) the crowd actually watched the darts as they cheered on their heroes.  This, as opposed to getting stupid drunk, dressing like clowns and singing off key.

Some dude on YouTube predicted that Tina Gulliver and Lisa Ashton would both do well as they were “tournament fit.”  Gulliver lost 3 sets to nil, Ashton lost 3-1 and “The Queen” Deta Hedman lost to “One Dart” Peter Manley 3-1. To quote Sergeant Frank Drebin from Police Squad, “How about that Queen?”

Butler’s match against Martin Adams in the quarters started off with the “American Eagle” soaring – taking the first set 3-0.  In set 2 Butler was up 2-1 when the wings fell off.  Adams put together legs of 14 and 15 to draw level.  Adams converted the next set as Butler would get only one shot at a double.  Adams would prevail 3-1 with the last leg being a 12-darter worth an average of 125.5.

Scotland’s Robert Thorton went through the field like “locus through a wheat field.” He got to the final with nary a lost a set going 9-0.

Against Adams, Thorton opened a can of “WA” winning the first 12 of 15 legs for a 4-nil lead. Was Adams that bad?  No.  Thorton was that good.   After going 1-10 in legs, Adams took a leg in 10-darts.  That was only because Thorton missed double tops.

As is par for the course, everyone had an opinion of this first Senior’s World Championship.  Most were negative, which is also par.

The Circus was chockablock full.  They came to see Phil Taylor, Mr. John Lowe and Bob Anderson.  Of the three, Taylor had the best result beating Peter Manley 3-1.  Taylor would lose in the quarter finals 3-0 to Kevin Painter who ended a string of 31 defeats against Taylor. Losing 31 in a row is “serving revenge really cold.”

Got to feel sorry for some of the past great darts players really struggling.  There’s always “sorry” when a friend or idol struggles with a double.

But the thrill of seeing our friends back on the oche has little to do with scoring or doubles.  It’s memories.  As Sally Kelly said when seeing the group photo, “Memories of the North American.”

No doubt some tinkering will have to be done with the format.  The two gentlemen in the finals were still active in competitive darts, giving them an advantage.  They alone wouldn’t have filled a phone booth.

Maybe change the age to 65 as todays 50 is yesterday’s 35.  A really smart tournament in the USA would add an open senior’s event as all us geezers still have the urge to at some point again be toeing the oche.

Thomas Wolfe is full of it.

You can go home again to be welcomed with open arms.  Maybe you are a little longer in the tooth, with a little less hair and an extra roll around the middle. We don’t care.

In North America you made darts fun with your playing and friendship.  To quote John Sebastian, “Welcome back!”

Look forward to your next visit.