All teams but one have now been sent packing.  Men at Work sing “Down Under” as Australia’s Damon Heta and Simon Whitlock receive their gold medals as PDC 2022 World Cup champion. 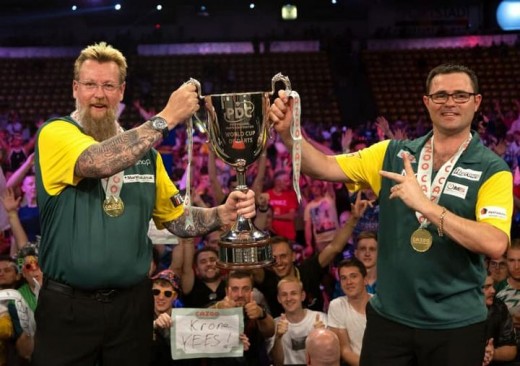 WHATS IN A NAME?

People that live in Frankfurt, Germany, are called frankfurters.  In the USA they’d be called hot dogs.  World Cup winners – in any sport, any country – are called champions.  All hail the Aussies!

The wining team is splitting £70,000 – chump change for today’s top professional dart players.  A suspicion is that at least one darter (Gary Anderson) couldn’t be bothered to drop his fishing pole for that piddling amount.  Scotland went out without a fight.  Thanks Gary.

The ODC’s choice was first on stage.  #3 Netherlands 2-1 over #6 Northern Ireland.  The betting public had them 4-1 favorites.  Betting folks are giving away money.  Daryl Gurney (NI) lost 2-4 to Danny Noppert (N).  Noppert broke in leg 5 after Gurney missed 3 from 16, then held in 15 darts for the win using a bull, 16 and d8 for the 4-2 victory.  A discombobulated Dirk van Duijvenbode (N) somehow beat “Roly Poly” Brendan Dolan (NI) 4-3 in a goofy match.  Down 1-3, van Duijvenbode missed 14 doubles despite arriving there first.  Twice he wanted T70.  The first time he tried and missed.  The second time he passed it up and lost.  Go figure.  After missing he finished T53 while Dolan was on 8, to level at 3.  Then, he pegged 94 for the win.

#1 England 2-0 over #8 Scotland.  The champs went out winning just one singles leg.  Michael Smith (E) went 4-0 through “Rockin’” John Henderson (S) quicker than gas through trousers after a preacher’s “Let’s pray.”  Smith averaged 91.09 as Henderson never reached a finish.  James Wade (E) looked to lose the first leg, then Peter Wright (S) missed 8 at a double.  This set the tone as Wade finally took out 40 in a mercy killing of a dreadful match for both. Wade 4-1.

#1 England lost 0-2 to #5 Australia.  On paper this should have been an easy win for England.  But matches aren’t played on paper.  Aussie international Wayne Weening, who son, Let’s Go Brandon, just scored a win in Australia, said “Simon Whitlock plays with passion.”  Boy, did he!  He sent England packing with a 4-0 Snyder of James Wade – this after Michael Smith was on his way to a 4-1 win over Damon Heta with 72 left.  He busted giving Heta a chance for 3-2 which he took.  Smith went into a funk as Heta used 14 for 3-3, then used 16 darts for the 4-3 win – and Australia’s place in the finals.

Australia was sailing along in the doubles 2-nil when Price changed course with three T18s and 162 followed by Clayton’s 127, leaving 16 which Price hit putting them back in the match.  At 3-3, Whitlock missed d18 for the World Cup (as he did in 2012).

In 2012, Whitlock had darts to win the Cup.  He missed as Adrian Taylor hit double 4 for the Cup.  This World Cup Whitlock was magnificent – the entire week.

All Hail the Victors!