The WDF/Lakeside World Championship dropped the curtain Sunday.  Most predictions made after the fact are “usually” 100% true.  The Old Dart Coach can predict Howlin’ Wolf singing “We gonna pitch a wang dang doodle, all night long” wasn’t played.  It should have been.

Still, the WDF finals was TV entertainment at its best.  One final was absolute proficiency on the sisal.  The other?  The drama of the men’s day after a night of beer, copious amounts of hot Indian takeaway and hardboiled eggs.

Golf crowned a “new” Masters star while at the Lakeside 18-year-old Beau Greaves’ star ignited fireworks like over the Vegas Strip on New Year’s Eve.  She became a Living Legend.

Did anyone have a chance of beating Greaves?  Yes.  Veronika Ihasz, who beat America’s Paula Murphy, took out 164 to level at 2 legs each, losing the decider in 18.  Only close call for Greaves.

It’s 100% sure that the PDC will embrace Ms. Greaves in July, just like tourists do buskers with a tip jar/guitar case on Blackpool’s Boardwalk.  Probably, it’s just coincidence that the PDC World Women’s Matchplay will also play Blackpool on July 24th.  Five women probably have their places secured with 3 spots wide open and 8 events on deck.  Ms. Greaves collected £25,000 and there’s a pot of gold on the horizon.  Fortunately, she has her sister and The Queen, Deta Hedman, for guidance.  From suffering with dartitis to the top of the darting world is a giant step.

The men’s final was entertaining without that seminal moment – as the moment of procreation often has.  It was like watching a “amorous couple in the front seat of Volkswagen beetle intent on some serious commitment.   There were twists and turns as neither had a commanding hand (no pun intended).  There were moments of brilliance interspersed with “head scratching,” splotchy scoring and a heck of a comeback when Northern Ireland’s Neil Duff found himself down 2 sets (3-0, 3-0), having not won a leg and with only 2 even in play. Then came the “pause for the cause.”  France’s Thibault Tricole may have been dreaming of a walk down the Champs-Élysées with the tri-color flag waving with rose petals tossed in his path.

Tricole forced a deciding set with a 3-0 win where Duff may have had an attack of the old “whips & jingles” looking at victory.  Duff recovered taking the decider 3-nil fishing with a pair of 15 darters.  As the first ever Frenchman in a Word Championship final the pressure probably got to Tricole as he had doubles to win two legs.

Duff’s post-match?  The best part about it was that none of the 5/6 Tour Card holders made it to the final.  “I would love a crack at it.  I’d love to be walking out to a PDC crowd.”  So, what’s stopping you?  Talent?

On Thursday, the Lakeside welcomed defending champions by sending them home.  After they demanded “Miracle” Mikuru Suzuki’s 2019 winning trophy back, she was eliminated.  “Miracle” won the first set (3-1) over Aileen de Graaf in 24, 16, 20.  After the break, Suzuki never scored like she can – she dropped the last two sets 3-0, 3-0.

The 2019 men’s champ, Wayne Warren, wasted 15 darts in the first two legs of the first 2 sets against Cameron Menzies going 0-2.  He never recovered, losing 3-0.  Warren had come from 2-down against Lee Shewan to win claiming he “slammed a pint at the break.”   Aiming fluid doesn’t’ always work but definitely keeps a player trying. 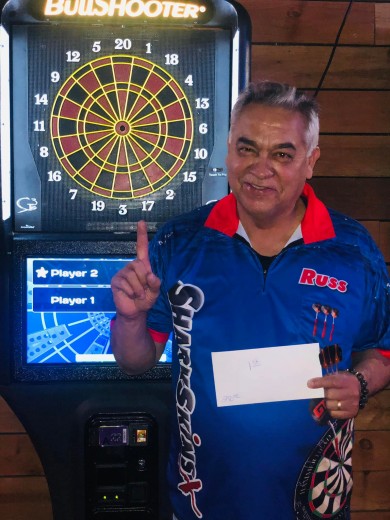 While the Lakeside World Championships didn’t prove positive for North Americans there were some bright spots elsewhere.  Canadian Matt Campbell would match up against Nathan Aspinall in a Players Championship final.  Coming from behind, Campbell would level at 3.  After falling behind again (4-6), he snuck up to 5-6 in 12 darts – which became 6-7.  Aspinall closed things out in 12 for the 8-6 win.

Finally, The Legend, Russ Lopez, using his new Bottelsen Signature Darts, won the Oklahoma Throwdown.  These extraordinary darts are available at your local dart store or direct from Bottelsen at https://bottelsendartsinternational.com.  Toast the Living Legend!

You’ll not be thirsty my friends.