In 2000, Roland Scholten – born in 1965 in The Hague – appeared as the first Dutchman in the PDC and he remained for many years.  He had played for some time in the BDO as an amateur who pursued a his profession and also played darts. 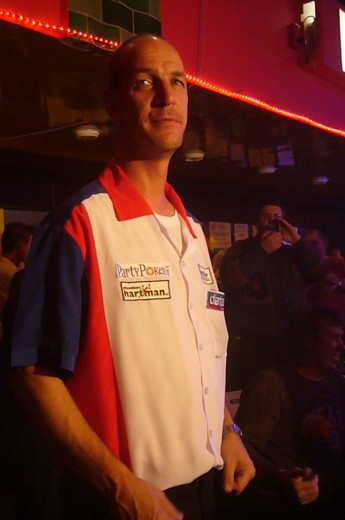 Scholten was quite successful in the BDO, winning some tournaments and qualifing from 1994 to 1999 for every BDO World Championship. Twice he reached the quarterfinals and lost there to Mervyn King and Ronnie Baxter.  In 1988 – in the  very same year Raymond van Barneveld won his first World Champion title – Scholten stood in the semi-finals and lost to Richie Burnett.  In 1993, Scholten won the men’s singles at the WDF World Cup and in 1997 he won together with Raymond van Barneveld the PDC World Pairs Championship.

After the BDO World Championship in 1999 Scholten decided he wanted to be a professional darts player and earn his living playing darts. That was not possible in the BDO system so he switched to the PDC.

At the time the PDC was neither as big or popular as it is today so many fans only knew the players who played in the BDO – the BDO events were televised for free from the BBC.

Eventually, the PDC became more and more important in the world of darts.  And it organised many more tournaments than the BDO and the prize money was much higher.  So, in subsequent years many players followed Scholten‘s lead and the BDO and its World Championship lost importance.

No wonder the BDO reacted sharply and imposed sanctions (to which of course the PDC reacted as well).  The players were forced to decide to play for one or the other of the organisations.

Scholten’s debut came in the World Matchplay 2000 but he lost in first round – as he did in the same year in the World Grand Prix.

In his PDC World Championship debut in 2001 he lost in the quarterfinals 2-4 to Rod Harrington.  He But stood in the same year in the final of the World Grand Prix and lost to Alan Warriner.

In 2002, Scholten entered the PDC World Championship as the number 6 seed but lost second round to Dave Askew.

In 2004, Scholten was the number 4 seed and lost first round to Lionel Sams.  But 2004 was nevertheless a successful year for Scholten who went on to won the UK Open – his only major win in the PDC.

In 2005, he was the number 5 seed again for the World Championship and lost fourth round to Denis Ovens.

In 2006 and 2007, Scholten was eliminated in the third round of the World Championship – though he was in 2006 the number 4 and 2007 the number 7 seed.  Around this time he started to have problems with his neck and shoulder which grew worse…

He got surgery but never really managed to come back.  Up until 2012 he still took part every year in the World Championship.  By 2010  he had slid down the PDC Order of Merit to #32.

In 2011 he qualified by the West Europe Qualifier and in 2012 he somehow managed to qualify by the Pro Tour Order of Merit – but never got further then the second round.  He was as no longer successful in the other Majors after 2008.  The last good placing he managed was in 2007 at the Las Vegas Desert Classic where he reached the semi-finals.

Scholten slid further down the rankings and in 2013 ended his PDC career.

Scholten also became well-known as a co-commentator on TV in the Netherlands and in Germany as well.  As his German is very good, he worked some time as co-commentator together with Elmar Paulke for the German TV broadcaster Sport 1 – and he was a very popular.  The Paulke/Scholten Team was iconic and to be sure helped to make the sport more wide spread and popular in Germany.  Scholten as well worked for some time for the German Darts Organization DDV as coach.  He didn’t completely stop competing and now takes part in the World Seniors Darts Tour.

In 2001 and 2002, Scholten was the only Dutch participant in the PDC World Championship.

In 2003, he was joined by the Dutch qualifier Arjan Moen – born 1977 in Amsterdam – who completely fell into oblivion.

Moen, who got the nickname “The Dutch Destroyer” from the PDC, had been quite successful in his youth and in 1995 won the WDF Europe Cup Youth.  From 2000 to 2002, he played in the BDO and took part in the World Masters.  Then followed his short trip to the PDC World Championship where he lost to Shayne Burgess.

Burgess was beaten second round by Scholten…

Moen returned to the BDO and played there some more years, taking part in a few open events.  From 2006 until 2010, Moen took part from time to time, and without success, in PDC Players Championships on the continent.  It seems he chucked darts after that.  As he once mentioned, he just couldn’t find a sponsor.

Moen was a friend of Vincent van der Voort and they practiced together.  In 2005, in an interview Moen spoke about how he practiced – usually half an hour a day and longer before events.  He tried to play 15-dart legs, practiced finishes from 121 upwards and some rounds of doubles.

His dream to stand on the Lakeside stage never came true.  For him – as for many darts players at that time – the PDC World Championship was only a second choice.