Discrimination should NOT be celebrated, encouraged or expected.  This is particularly true in sport where competitors and organizations fly the equality flag, at times to excess.  Talk is cheap.  Action takes willpower.  Discrimination has many sides including race, color and religion – all ugly.

Darts has been hit with an especially ugly incident of discrimination.  The World Dart Federation and the PDC have handled the situations differently.  The WDF, claiming to be “non-political,” jumped into politics by placing their lips on the backside of the International Olympic Committee (IOC) for no intelligent reason.  The IOC (Executive) may be the most corrupt body in sport, running neck and neck with FIFA.

The IOC turned a blind eye to Russian’s slave labor allowing Russia to hold the 2014 Olympic Games.  The just concluded games in China were held after that country unleashed Covid – killing 6,044,192 worldwide (so far).  Using the IOC as a moral compass or ethical guidance counselor is the same as taking investment advice from Bernie Madoff or buying a Rolex on the Las Vegas Strip for $10.

The WDF sent Chief Development Officer, Richard Ashdown, out to announce their plan.  Social media has unfairly criticized Ashdown.  Never blame the messenger for the message.  Following the IOC’s recommendation, no Russian players are permitted to participate in WDF events – four competitors have been withdrawn from the 2022 World Championships.  No other sport, to date, has banned or removed players from competition.  Teams based in Russia have been ousted but no individuals.

It’s strange the IOC would recommend …that no Russian players are permitted to participate in WDF events.  It’s doubtful the IOC even knows what the WDF is.  The IOC never mentioned the WDF.  The IOC offered an escape (which they used in China): …everything in their (organization’s) power to ensure that no athlete or sports official from Russia or Belarus be allowed to take part under the name of Russia or Belarus.  The WDF disposed players who weren’t “representing” a country – they were representing themselves.

The Old Dart Coach is of the opinion that the WDF took this position hoping to curry favor and eventually see darts become an Olympic sport.  A person with knowledge (aka PWK) strongly disagrees.  Many countries receive funding through AIMS and GAISF.  Both organizations will only fund sports that are IOC recognized, so those countries would all lose funding if WDF didn’t seek recognition.  That’s pure bushwa.  The IOC will never recognize the WDF.  Believing in Unicorns would be a better bet.

Gone from the WDF World Championships at Lakeside in April is the #2 WDF world ranked player, Anastasia Dobromyslova, along with three players that reside in Russia.  Ms. Dobromyslova does not, is married to a Brit, is a longtime resident of the UK and has dual citizenship along with 34 major darting titles.

Under English law a person is allowed to hold duel citizenships so she should be treated as an English citizen.  Instead, she’s treated like a criminal.  The crime?  Being born in Russia.  The banned players are as much a part of the Russian war machine as a rooster is responsible for raising the sun.  The WDF is engaging in blatant discrimination.

The PWK was told, Anastasia was banned from PDC ladies’ series unless she changes her primary country nationality from Russia to British and maintains that for 5 years.  WDF have also stated she can play Lakeside if agrees to play under England flag.  A person close to Ms. Dobromyslova stated, The PDC have stated that Russian players can play under a neutral flag/banner.  We have heard nothing from the WDF.  Both the PDC and the ODC confirmed these positions.

The PWK argued that Ms. Dobromyslova was absent from the first ladies series due to the PDC ban. That simply is not true.  The PDC decision came on Tuesday after Dobromyslova, a private person, decided to get away from the “kerfuffle,” hoping for calmer waters ahead.

The WDF is trying to play both sides of the street.  The ODC caught ’em in the middle and he’s a double decker bus bearing down.  As for being “non-political” the official WDF website presents: The world is horrified by what Russia has done, aided and abetted by Belarus.  The unprecedented sanctions that are being imposed on Russia and Belarus by countries, and industries, all over the world appear to be the only peaceful way to disrupt and disable Russia’s current intentions and restore peace.”  So, the WDF banning darters helps deter the Russian war effort?

The WDF officials hide behind the shield of the organization.  Who actually made the decision? “From the WDF” is false.  It was either a person or a group of persons.  Nowhere on the WDF website is there a list of the WDF officers.  If a WDF officer did materialize to answer questions, it’s a good bet is they’d use the OJ Simpson defense.  “The other guy did it.” 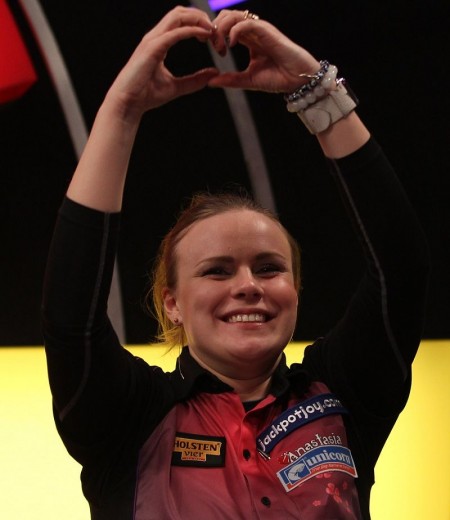 From an Aussie, I don’t agree that Anastasia was withdrawn… disgraceful really.

From the UK, this is a poorly thought out decision.  The decision also effects the youth program where 6 of the top boys and 8 of the top 10 girls are Russian including the runway points leader for the girls, Ksenia Klochek.  She’s also #22 on the women’s table.  If the points for the Russian girls were removed Aaja Jalbert of USA would be #1.  Certainly, removing the youth will cause Putin to rethink his war aims!

The WDF offered the following “chocolate covered road apple” drivel: On behalf of the WDF, I would like to thank the RDF (Russian Darts Federation) and the players affected for their understanding and the integrity shown during this time.  Especially to Anastasia Dobromyslova, who as one of the greatest champions and most beloved personalities in the sport, will be sorely missed at the Lakeside in April.

Who is “I” thanking the Russian Darts Federation and Ms. Dobromyslova for her “integrity?

Why you sanctimonies bastards!   How dare you talk of “integrity”.  You have no idea what the word means!  Below the “I” statement is a large photo of Anastasia Dobromyslova with arms raised over her head her hands making the heart sign.

The WDF president Bill Hatter (Canada) and vice president, Buddy Bartoletta (USA), are a strange pair to be involved in this outrageous act of discrimination.  They’re from two North America WOKE countries that preach equality and fairness 24/7, at time ad nauseam.

Many years ago, the men rose up against the BDO begetting the PDC.  Now is the time for WDF players to take a stand.  All players currently scheduled to play in the World Championships should inform the WDF they will play only when the four women are reinstated.

Athletes today talk the talk of fighting discrimination.  Darts players have the chance to walk the walk.

PWK wrote “won’t hold my breath for that to happen.”  The ODC wholeheartedly agrees with a HELL, NO!

Wait until those turning the other cheek now someday become the victims and no one stands up for them.  Then listen to them whine.